The Wayfarer is a tabletop map-game for 3-5 players.

After several years of wars and struggles, their magnificence Torgaljin I crowned themselves Khan of Khans, thanks to their strong arm and armies, and their subtle mind and minions.

Among the many who were overthrown by them, there was an ancestry of prince-merchants who swore oaths to their enemies, and who crawled to their feet and begged for their mercy.

“I will spare you people,” the Khan said “but, first, you will swear oaths to me, and accept to be one of my Thousand Eyes. Now I have an empire worthy of a Khan of Khans, unlike the ones of the other Khans before me: nor I know its limits, nor all the people, nor all the regions of my domain. You will travel along the roads of my empire as one of my Wayfarers: you will draw the maps of my kingdom, you will record all that you see and, then, you will report it to me. This you will do, as long as I, and my heirs, please.”

The Wayfarer swore their oaths, and their journey began. This is the story of their endless journey.

☕️ I only sell the games I wrote, playtested and finished, and for which I have the legal rights. However, if you really like my creations, you can buy me a coffee. 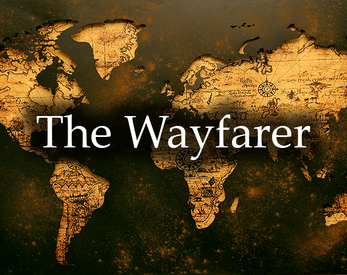